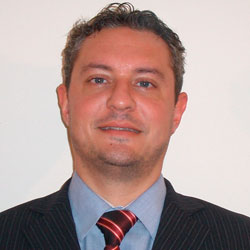 Javier Rodriguez Saeta, CEO
The advent of biometric systems and visual surveillance systems has created a huge expectationconcerning security in its capability to identify diverse aspects and features of a body individually. The emergence of effective facial recognition technology nowsatisfies the dual requirements present in biometric as well as visual surveillance systems. With the market rolling around 20percent for security each year and with more than 70percent of the US population favoring facial recognition at various security locations, the market has indeed turned into a sweet spot especially inthe facial recognitionspace.

Technology space is Herta Security. Founded in 2009, Herta has been a leader in building cutting edge facial recognition technology for the global market offering both security and marketing solutions.. Herta Security differentiates itself from the rest of its competitors by offering the fastest facial recognition technology in the world along with great accuracy, scalability and ease of use.

The firm develops technology on multiple face detection, black list administration (filtered by name of the person and an identity code ) along with the status and the history of the person i.e. if he was blacklisted anytime before.

Transcending the Visual output through GPUs

Having maintained a fine relation with Nvidia, theleader in Visual technology space, Herta has been providing the industry with a visual advantage by using GPU(Graphic Processing Unit) boards from Nvidia.
Identifying the problems in analyzing multiple faces in real time, the firm has implemented GPU boards as opposed to the conventional CPU boards that are usually slowand with CPU alone, it becomes impossible to scale up the analysis with the cost of computation also going high.

Regarded as experts in crowd analysis, the firm’s high performance product BioSurveillance NEXT is a testament to that. BioSurveillance NEXTidentifies multiple faces in crowded environments and compares against thousands of blacklisted people. Whats more, the technology operates 40 times faster than the conventional CPU based ones and also offers high definition video processing at a rate of 150 frames per second. With major camera manufacturing companies launching their cameras to cover 4k resolution, the firm meanwhile has been very successfully processing 4k imagesin order to cope with these types of cameras with a view of covering wider areas.

The facial recognition market has been expanding for security especially in the US.Apart from the American market,the firm has found traction in Europe, Latin America, Middle East and African countries where security has become a crucial aspect.Herta Security has been innovating tirelessly to provide the best products for marketing in terms of facial recognition. Apart from developing new products incorporating robust features, the firm has also been constantly investing a lot in research with a view to create products that are more competitive with high accuracy and of much faster speed than the current ones. The firm has also participated in projects in collaboration with the police and security forces and intends to expand globally going forward.